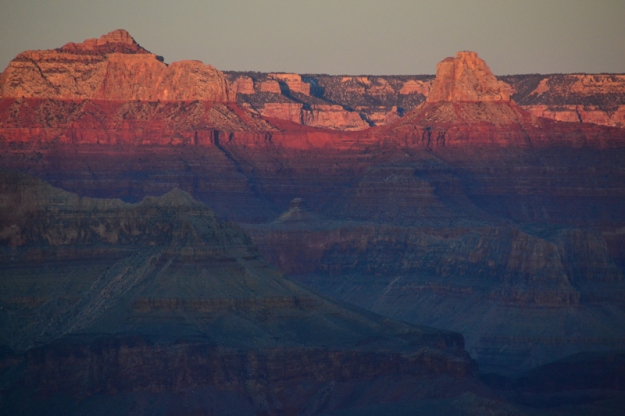 This spring break I joined my family on a five day backpacking trip on the Hermit/Boucher trail in the Grand Canyon. We started a day late due to a snowstorm, but seeing the canyon decorated in white was worth the wait.

Backpacking in the wilderness is magical because it transforms your perspective of space and time. Instead of flying or driving to get from point A to point B, you walk, which makes distances more real. Without a schedule or deadlines to meet, and no watch, you wake up with the sun and sleep with the stars, you eat when you’re hungry, and stop when you’re tired.

The Grand Canyon leaves an even greater impact on me because of the vastness of the landscape and time it took to create the gorge in the earth. It makes my individual life feel so insignificant when I compare myself to the expanse of time and space that the canyon takes up. But then again, on the trail, I met other students from Western Washington University, which made the world seem so connected and small.

Below are some photos from the trek that caught my eye. 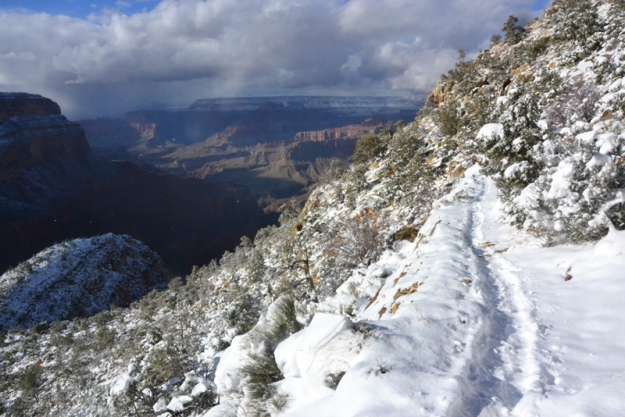 We made the first tracks on the Hermit-Boucher trail on March 19, 2012 where tufts of snow rested on branches of desert foliage.

As we descended deeper in the canyon it became warmer and the ice that had formed on twigs began to melt. The crinkling sound of melting ice was so similar to the sound of Rice Crispies popping in milk that my mom called it "ice crispies." 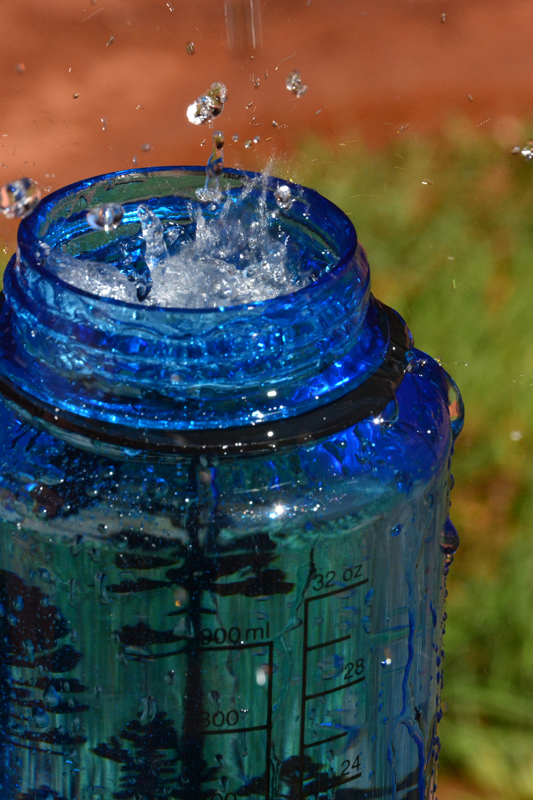 There's nothing better than to drink crisp cool water straight from a spring. At Dripping Springs we filled up on water that fell from an opening in the cliff. Water is an essential resource while backpacking, especially in the desert landscape of the Grand Canyon, so it's important to fill up at every opportunity.

The Colorado River flows green at the bottom of the canyon. Sometimes the sediment in the river colors it reddish-brown to match the canyon walls.

A camp on a plateau near Whites Butte offers a view across the canyon.

Morning light shines near a camp by Whites Butte.

The redwall section of the Grand Canyon is decorated with mazes of caves within its walls.

Agaves, a succulent plant, thrive in the desert landscape. 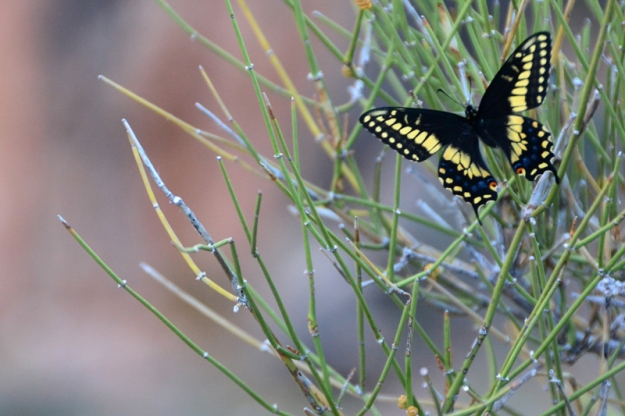 The face of the fish I was studying stares back while lying next to a freshly chopped friend.

At five a.m. I walked outside into the cool Saigon morning to hop on a motorcycle with my friend and translator Long.  An indigo tinted dawn was just breaking—it was still early by American standards, but Saigon before sunrise is surprisingly active. People were running down the streets and stretching, squeezing in some exercise before their work for the day began.  Some people were already perched on the sidewalk selling breakfast foods, and coffee was being consumed under the florescent lights that spilled out of cafe storefronts. This was the start of a day of independent research I did in Vietnam as an American student studying catfish.

Aquaculture from the ocean and rivers is layed out to be sold early in the morning. 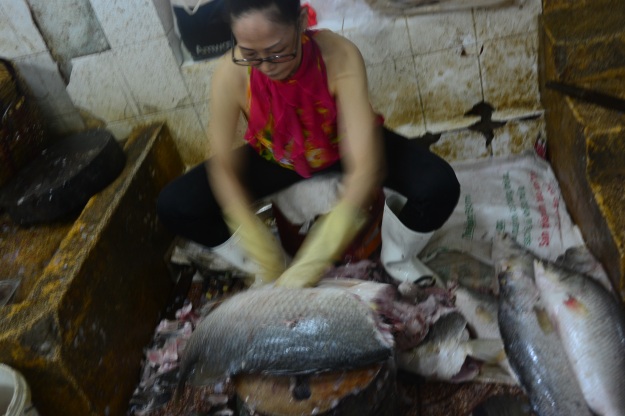 A woman guts a fish at Dien Binh market.

A study abroad class on Vietnam and America allowed me to participate in cultural exchange with a country I initially knew little about, as well as conduct an independent field study on catfish farming and food systems in Vietnam. For the class I was required to choose a topic to research, and after a little deliberation I delved into the idiosyncrasies of the 2001 “catfish war” between the United States and Vietnam. The “catfish war” was ultimately a trade conflict over the importation of Vietnamese catfish into the United States. American catfish growers were concerned about competition from inexpensive Vietnamese catfish and claimed that it was not really catfish – and sought legislation in the U.S. Congress that would force Vietnamese growers to use some other term.  Vietnamese growers began calling their catfish the Vietnamese names for the subspecies of catfish grown in Vietnam—basa and tra—which in turn also sold well in the U.S. and Europe.  The struggle over Vietnamese imports was part of larger negotiation between the U.S. over economic relations, however, that began with normalization in 1995 and ended in 2006 when Vietnam entered the World Trade Organization.

While studying the catfish trade specifically I became fascinated with the flow of food within Vietnam as well.  Vietnamese food, especially pho, is famous in the United States.  I wanted to know how this food was produced, marketed and consumed in Vietnam. What I discovered is that food identifies a people in a variety of ways. Food is necessary for us to survive; yet all of us establish different ways of distributing and eating food.  By learning about Vietnamese food in Vietnam, I learned about Vietnamese culture and ate pretty well.

Anne D'Aquino and Rachael Bowers perfect the art of eating with chopsticks while eating a dish of fried noodles on the streets of Hanoi.

To learn more about the catfish industry, I explored traditional markets, wholesale markets, new supermarkets and a catfish-filleting factory. To contextualize the catfish market I took pictures of every meal I ate, asked my Vietnamese peers about their food shopping habits, and visited agricultural landscapes in the Mekong Delta. 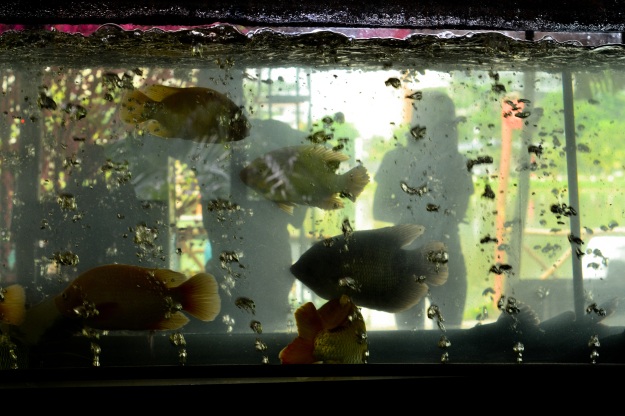 A fish tank in district 7 or Saigon is displayed in the entrance of a restaurant.

Almost every day I spent in Vietnam I walked through one market or another, and saw the flow of food in Vietnam at its most intense. The only arrangement similar to Vietnamese markets in America are “farmer’s markets” where locals come to sell their wares, but they are not generally viewed as mainstream and are open only on certain days. So seeing permanent open markets in every neighborhood in Vietnamese cities was new to me. The food sold in the markets is visibly fresh, quite different from the packaged products commonly bought in the United States. To get to different markets around Ho Chi Minh City I had to maneuver through the endless motorcycle traffic, which might be just as chaotic as the myriads of connections in the food system. From the outside the markets are intimidating and confusing, but everyone seems to be able to communicate and food is distributed effectively.

Fresh vegetables sit in open-air markets. Vendors spray the greens periodically with water so they retain their freshness.

Meat is also displayed in the markets. Every part of an animal is eaten from brains and livers to intestines and hearts.

To see where the vendors in smaller markets purchased their goods I visited Binh Dien wholesale market in Ho Chi Minh City early in the morning. There I observed the flow of fish from farmers, to wholesalers, to smaller market vendors. Some of the salesmen handed me a slimy catfish that I held with my bare hands. I watched as farmers dropped off their catches in trucks, wholesalers prepared loads of fish for smaller sales and the overseers counted the dong collected, all amongst a warehouse tinged with the scent of the sea and gleaming with water splashed across the entire floor. I was literally immersed in the flow of Ho Chi Minh City’s food systems when I went to these markets – and also learned how markets are places where all kinds of other exchanges take place at the same time. 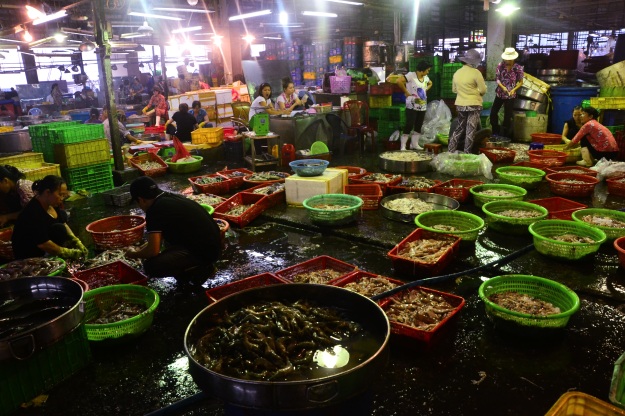 Baskets and tanks of fish are spread across the floor in the wholesale market.

If food in the traditional markets comes from the rivers and fields of Vietnam, it appeared to come from other directions in the new supermarkets of Vietnam.  We traveled by motorbike to survey the offerings of several supermarkets. At a Lotte Mart, a Korean chain similar to American grocery stores, I found packaged foods imported from all over the world. I noticed food in these stores that had been harvested, processed and shipped from Europe, other Asian countries, South America and the United States. The supermarket is a marker of changing food systems in Vietnam; it represents Vietnam’s connection with the globe and with modern food systems in a way that is normal to Americans but I now understand is new to Vietnam.

To further understand the development of the catfish industry—and the modernization of food production in Vietnam—I visited Hiep Thanh, a seafood joint stock company that specializes in processing pangasius, the scientific name for Vietnamese catfish. There I saw the controlled processing of foods for export upfront, in rubber boots and a facemask. The company manages the making of its products from beginning to end, from raising fingerlings to maturity, to filleting and freezing them and then packaging them for export. The regimented factory system was a testament to the standardization of foods systems developed for export. Hiep Thanh is clearly processing their fish for an international market and for supermarkets all over the world, primarily exporting frozen fillets meant for places with freezer capacity and a market for value added items. They are producing for a different type of consumer than is found in traditional Vietnamese markets where the fish are bought live and gutted on the spot.

In the catfish-filleting factory everything is standardized. Workers perform the same tasks for up to 10 hours each day. 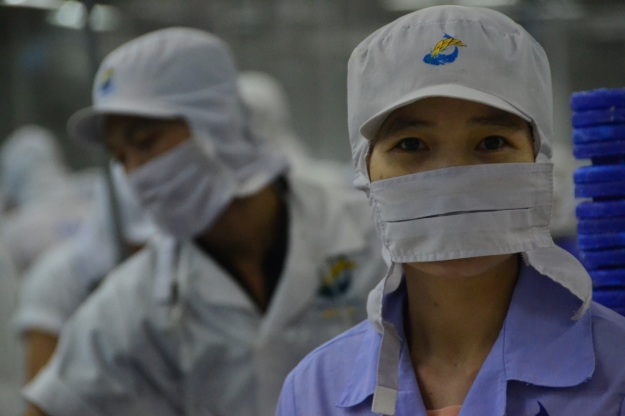 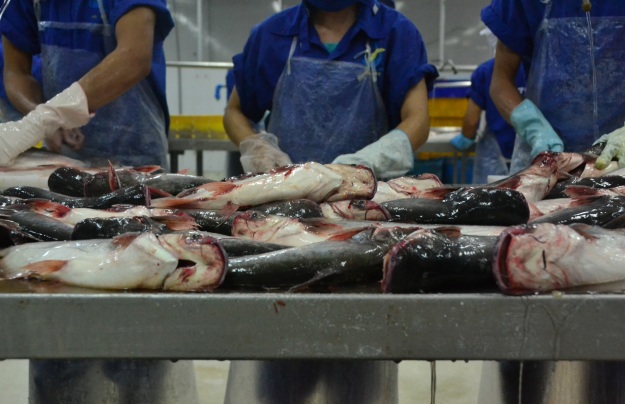 Catfish are thrown into piles for workers to fillet. 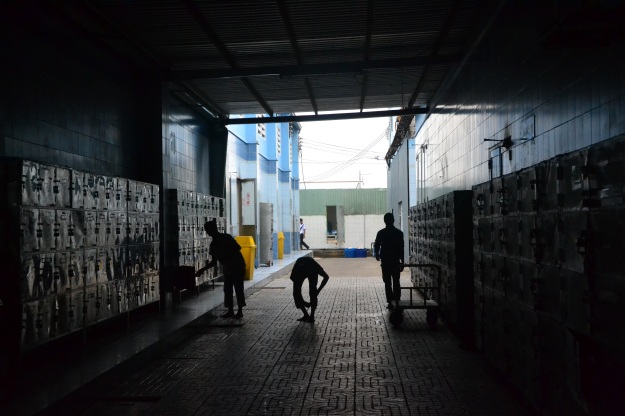 Three employees of Hiep Thanh change back into their own clothes at the end of their work day.

I didn’t answer the questions I brought with me to Vietnam: What are the current trade issues between America and Vietnam, and did the catfish war play a role in Vietnam’s success in the global catfish market? But I did discover that a world that I once thought was so separate from the one I reside is actually connected in more ways than I realized. When I began, my only knowledge of Vietnam were allusions and anecdotes I had heard about the Vietnam War from brief lectures in history classes and the generation alive during that time. I connected the trade dispute between the two countries to the war, predicting that it may have been an extension of unfinished business between the countries. But I now see that disputes between the U.S. and Vietnam now are more a consequence of a growing friendship rather than differences and negotiations with each other as we sit down and share food, for better or for worse, at the same table.  All of us are what we eat, and there is no better way to understand Vietnam than to understand the food that the Vietnamese eat—or send out into the world for others to eat. 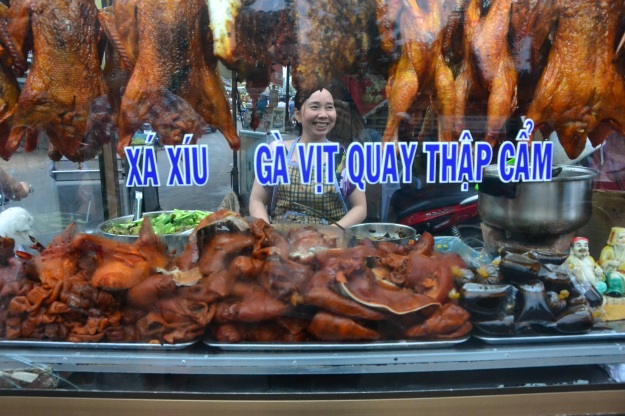 A street vendor sells a variety of meat on the streets of Long Xuyen.